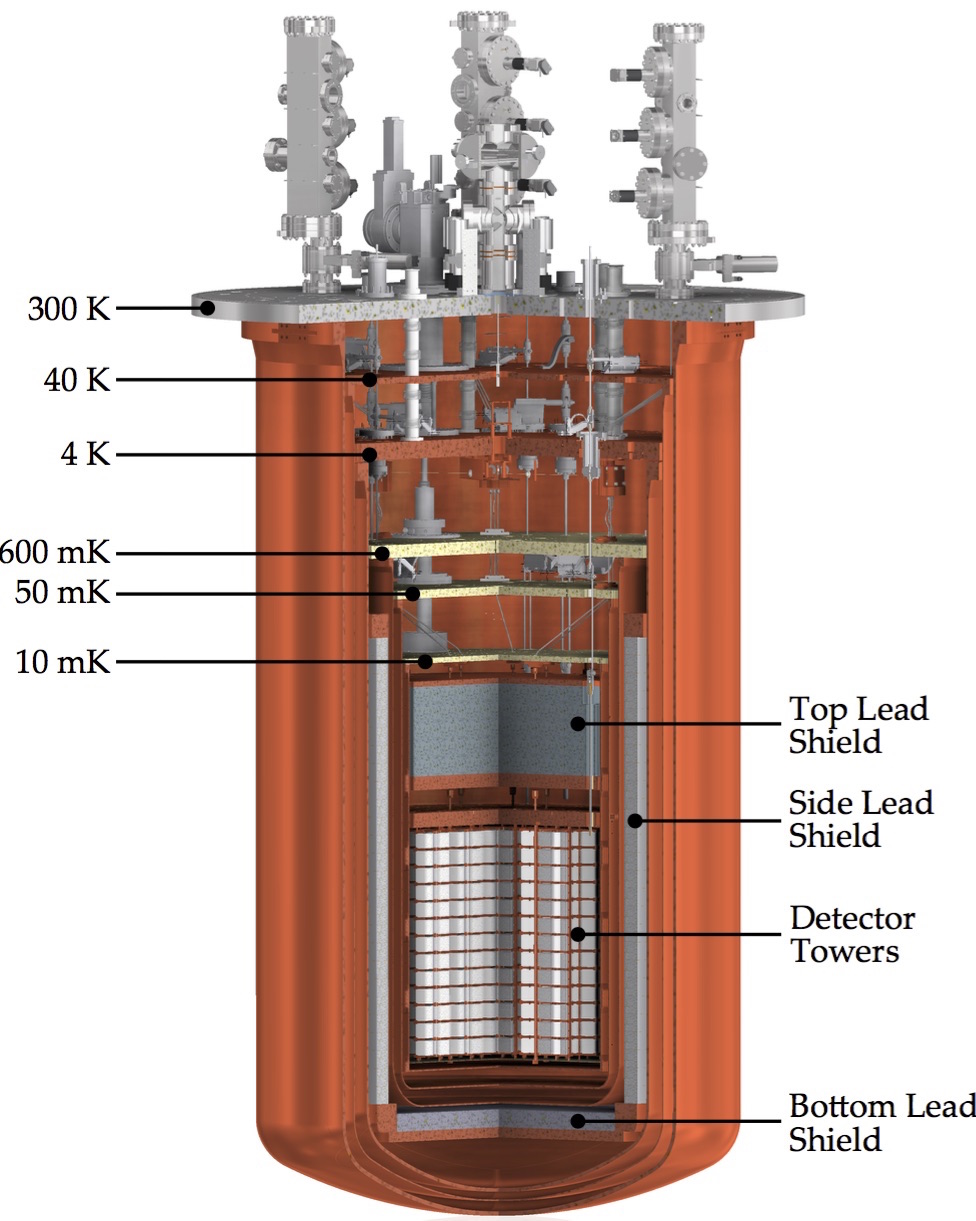 The CUORE detectors and their shielding must be cooled to approximately 10 mK before they can take data. We cool them using one of the largest and most powerful helium dilution refrigerators ever constructed. Our cryostat produces the coldest cubic meter in the known universe.

To reach such a low temperature, the cryostat is cooled in different stages. The first, which allows the cryostat reach a few degrees above absolute zero, can be performed using cryogenic liquids (liquid helium and liquid nitrogen) or pulse tube cryocoolers. For CUORE, we chose the latter, as it ensures that the cryostat will be stable over several years without needing to replace boiled off liquid cryogens, which disturbs the detector operating conditions.

The second stage, that brings the temperature down to a few  mK, exploits the unique properties of two isotopes of helium, 3He and 4He, to cool matter to a fraction of a degree above absolute zero. At very cold temperatures, 3He and 4He cannot be mixed in an arbitrary ratio; the mixture will spontaneously separate into two phases, much like oil and water. These phases are known as the concentrated phase, containing mostly 3He, and the dilute phase, containing mostly 4He. A pump outside the cryostat pulls 3He across the boundary from the concentrated phase to the dilute phase, an endothermic process that absorbs energy and is the key to the cooling power of the refrigerator. This 3He is then returned to the dilute phase, completing the circuit. We pump on the dilute phase to encourage faster phase change from concentrated to dilute, just like blowing across the gas above a cup of tea encourages a phase change from liquid to gas, cooling your tea.

Smaller dilution refrigerators are commonly used in modern low-temperature experimental physics; they typically have working spaces of tens of cubic centimeters. The CUORE detectors, on the other hand, weigh approximately a ton and are approximately a cubic meter in size, and are accompanied by several tons of copper and lead shielding that need to be cooled as well. Also, the CUORE detectors are extremely sensitive to any radioactive background, so the cryostat had to be constructed from extremely radio-pure materials. For these reasons, the design of a cryogenic facility for CUORE was a real challenge.

The cryostat is surrounded by an octagonal lead shield and borated polyethylene neutron shield. Some of the lead used for shielding close to the detector was recovered from an Ancient Roman shipwreck off the coast of Sardinia. For more information, see Roman ingots to shield particle detector in Nature News.