Below are some highlights from our recent results. Click on each image to download a PDF version.

In April 2022, the CUORE collaboration reported new results from the search for neutrinoless double-beta decay in 130Te, using the latest advanced cryogenic calorimeters. CUORE, operating just 10 millikelvin above absolute zero, has pushed the state of the art on three frontiers: the sheer mass held at such ultralow temperatures, operational longevity, and the low levels of ionizing radiation emanating from the cryogenic infrastructure. With a total exposure of 1038.4 kg⋅yr, we find no evidence for 0νββ decay and set a 90% CI Bayesian lower limit of 2.2 × 1025 yr on the 130Te half-life for this process. CUORE now collects sensitive exposure with 984 out of 988 calorimeters, at a rate that is, to our knowledge, unprecedented for cryogenic particle detectors, thereby proving that the cryogenic calorimeter technique is scalable to tonne-scale detector masses and multi-year measurement campaigns, while maintaining low radioactive backgrounds. In this article, after a description of the data treatment and 0νββ decay search with greater than 1  t⋅ yr of TeO2 exposure, we discuss potential applications of the advances made with CUORE to other fields such as direct dark matter, neutrino and nuclear physics searches and large-scale quantum computing, which can benefit from sustained operation of large payloads in a low-radioactivity, ultralow-temperature cryogenic environment. The plot shown in the figure represents the full energy spectrum after the base cuts, the anti-coincidence (AC) cut, and the pulse shape discrimination (PSD)analysis cuts. The most prominent background peaks are also highlighted. The inset shows the region of interest after all selection cuts, with the best-fit curve (solid red), the best-fit curve with the 0νββ rate fixed to the 90% CI limit (blue), and background-only fit (black) superimposed. 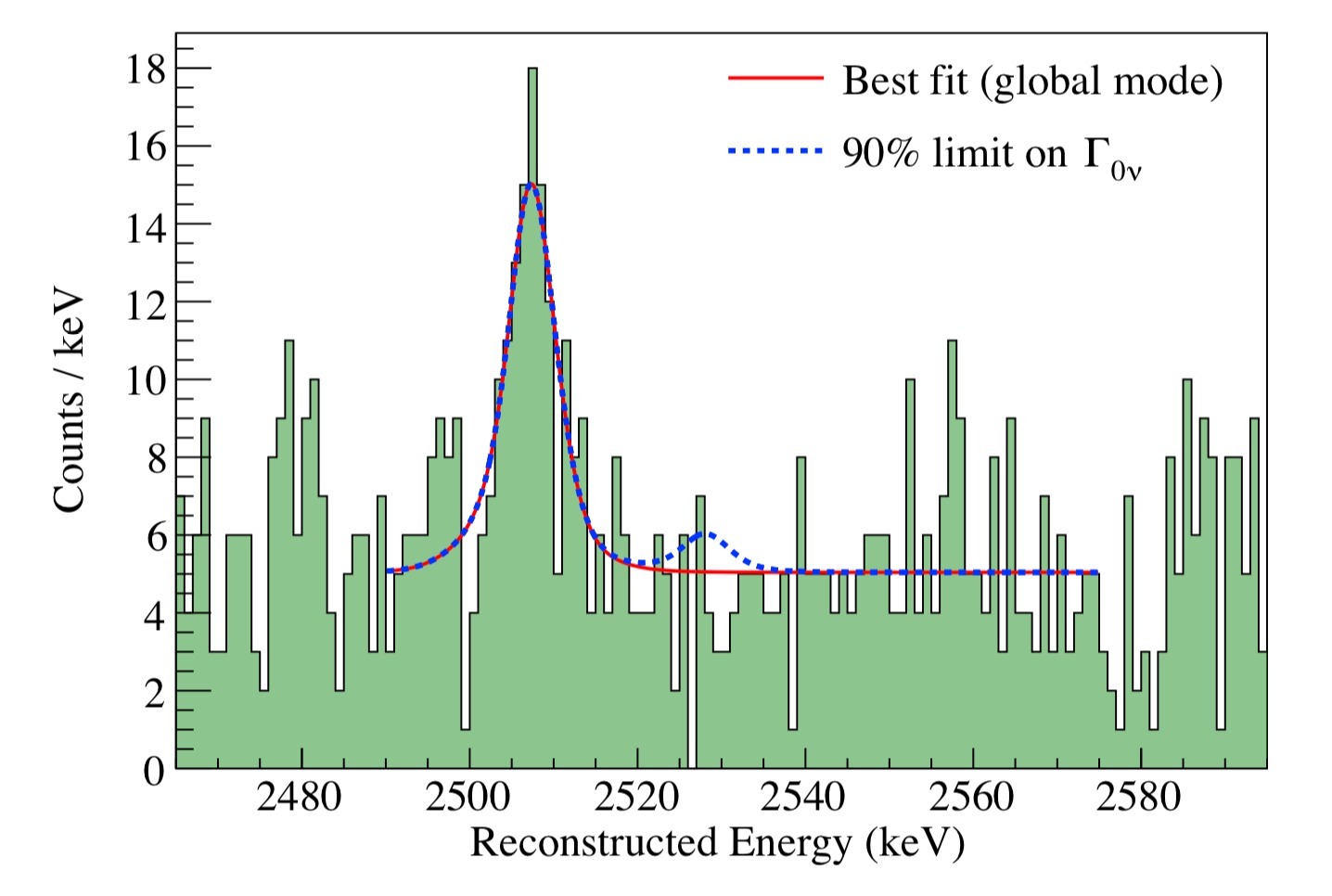 In December 2019, the CUORE collaboration reported new results from the search for neutrinoless double-beta decay in 130Te. This search benefits from a four-fold increase in exposure, lower trigger thresholds and analysis improvements relative to the previous results, reported in late 2017. With this analysis, we observe a background of (1.38 ± 0.07) × 10−2 counts/(keV⋅kg⋅yr) in the 0νββ decay region of interest and, with a total exposure of 372.5 kg⋅yr, we attain a median exclusion sensitivity of 1.7 × 1025 yr. We find no evidence for 0νββ decay and set a 90% CI Bayesian lower limit of 3.2 × 1025 yr on the 130Te half-life for this process. In the hypothesis that 0νββ decay is mediated by light Majorana neutrinos, this results in an upper limit on the effective Majorana mass of 75–350 meV, depending on the nuclear matrix elements used. The plot shown in the figure represents the spectrum in the region of interest with the best fit curve (solid red line), and the best fit curve with the 0νββ decay component fixed to the 90% CI limit (dashed blue line).

On november 2018 we reported on a search for double beta decay of 130Te to the first 0+ excited state of 130Xe using a 9.8 kg⋅yr exposure of 130Te collected with the CUORE-0 experiment. In this work we exploited different topologies of coincident events to search for both the neutrinoless and two-neutrino double-decay modes. We found no evidence for either mode and place lower bounds on the half-lives: T0ν0+ > 7.9 × 1023 yr and T2ν0+ > 2.4 × 1023 yr. Combining our results with those obtained by the CUORICINO experiment, we achieved the most stringent constraints available for these processes: T0ν0+ > 1.4 × 1024 yr and T2ν0+ > 2.5 × 1023 yr. 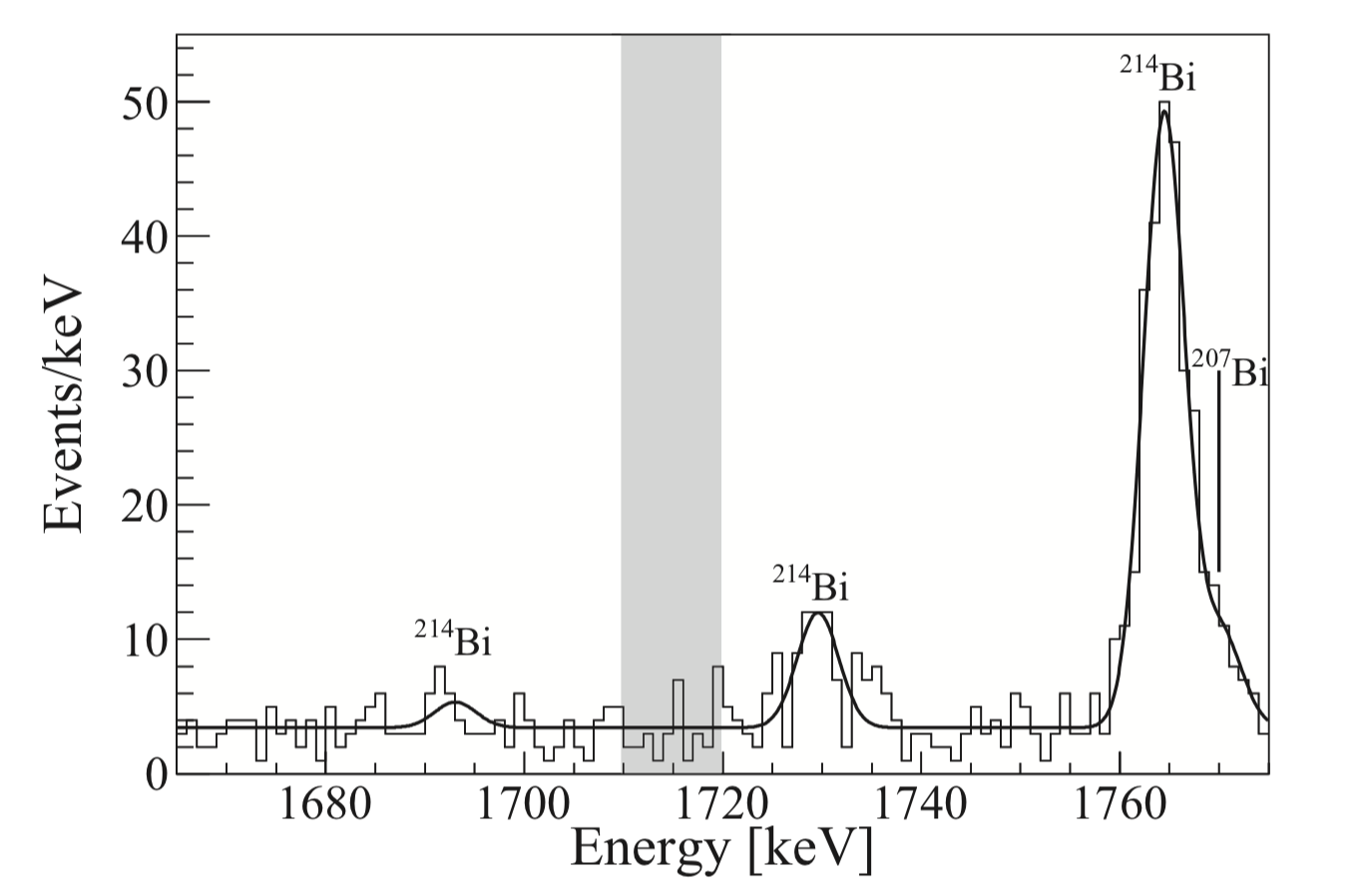 In May 2018, we reported the results of the search for neutrinoless β+EC decay of 120Te performed using the final CUORE-0 data release. We described a new analysis method for the simultaneous fit of signatures with different event topology, and of data subsets with different signal efficiency, obtaining a limit on the half-life of the decay of T1/2 > 1.6 × 1021 yr at 90% CI. Combining this with results from Cuoricino, a predecessor experiment, we obtained the strongest limit to date, corresponding to T1/2 > 2.7 × 1021 yr at 90% CI.
The shown plot represents the energy spectrum relative to the signature in which the total energy is entirely absorbed by a single crystal. The curve corresponds to the best fit minimal model, with the 0νβ+EC decay peak normalized to the 90% CI limit. The shaded area corresponds to a 10 keV region around the expected signal peak position. 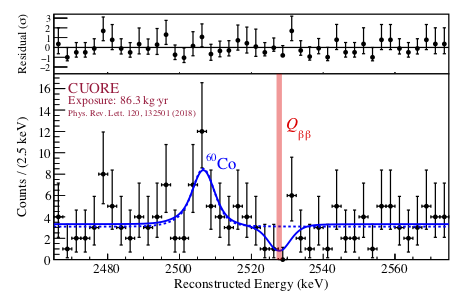 First Results from CUORE: A Search for Lepton Number Violation via 0νββ Decay of Te-130

In October 2017 CUORE reported its first results in the search for neutrinoless double beta (0νββ) decay. In just a few months of operation CUORE accumulated 86.3 kg⋅yr of exposure in TeO2 corresponding to 24.0 kg⋅yr in 130Te. Alone CUORE set the most stringent limit on this half-life at T1∕2 > 1.3 × 1025 yr (90% C.L.). When combined with previous results from Cuoricino and CUORE-0, the half-life result is T1∕2 > 1.5 × 1025 yr (90% C.L.). The background index in the region of interest for the decay was observed to be 0.014 ± 0.002 counts/(keV⋅kg⋅yr), near the design goal of CUORE. Shown here is the best fit model from an unbinned extended maximum likelihood (UEML) fit of the data (solid blue line). This is overlaid on the spectrum of the 0νββ decay candidate events in the region of interest with gaussian error bars. The pink band is centered at the energy we would expect to see the decay with a width reflecting the systematic uncertainty in our energy reconstruction. The dashed blue line indicates a model with no 0νββ decay component. The peak at 2506 keV is attributed to 60Co decay. At the top are the normalized residuals of the model compared to the binned data points. 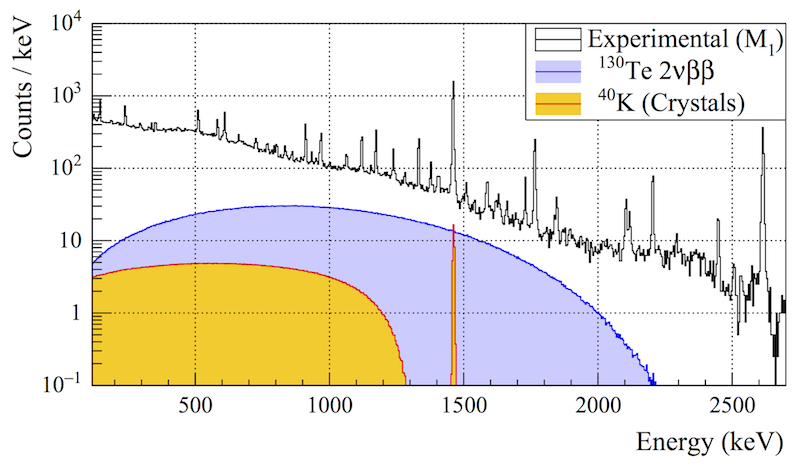 In September 2016, we reported the results of a search for two-neutrino double beta decay in a 9.8 kg⋅yr exposure of 130Te with CUORE-0. From an exposure of 33.4 kg⋅y of TeO2, we determined the half-life to be T1/22ν = [8.2 ± 0.2 (stat.) ± 0.6 (syst.)] × 1020 y. We obtained this result after a detailed reconstruction of the sources responsible for the CUORE-0 counting rate, with a specific study of those contributing to the 130Te neutrinoless double beta decay region of interest. 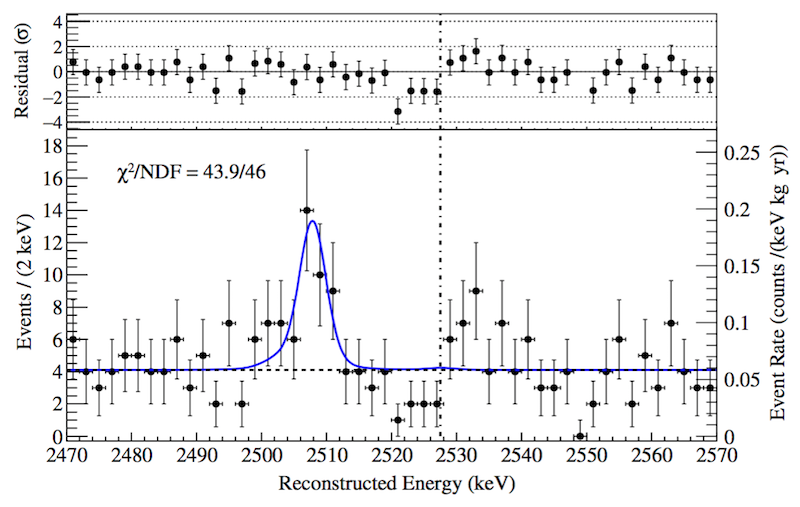 In April 2015, we reported the results of a search for neutrinoless double beta decay in a 9.8 kg⋅yr exposure of 130Te with CUORE-0. We set a half-life limit of T1∕20ν > 2.7 × 1024 yr at 90% C.L. from CUORE-0 alone, and T1∕20ν > 4.0 × 1024 yr at 90% C.L. when combined with Cuoricino. The background index in the region of interest for this decay was 0.058 ± 0.004 (stat.) ± 0.002 (syst.) counts/(keV⋅kg⋅yr). Shown here is the best-fit model (solid blue line) overlaid on the spectrum of 0νββ decay candidates in CUORE-0 (data points); the data are shown with Gaussian error bars. The peak at 2507 keV is due to 60Co and the dash-dotted line indicates the position at which we expect a potential neutrinoless double beta decay decay signal. The dashed black line indicates the continuum background component in the ROI. The top panel shows the normalized residuals of the best fit model and the binned data points. 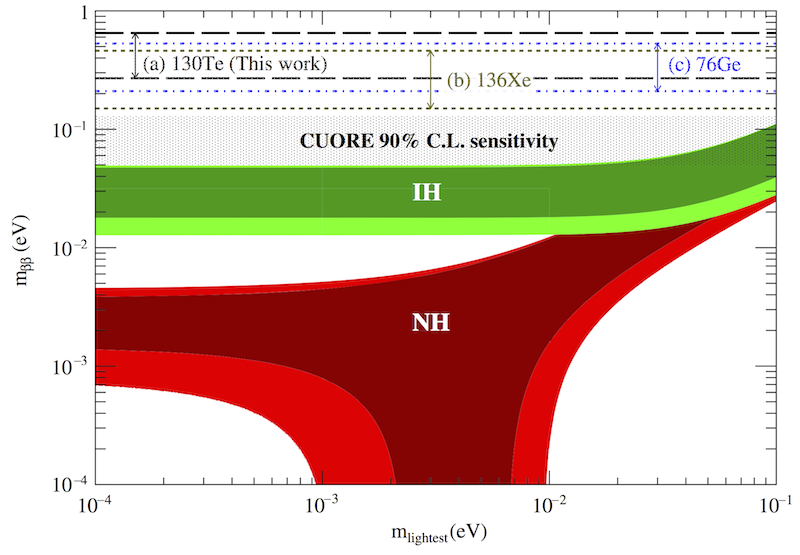 Constraints on the effective Majorana neutrino mass (mββ) vs. the lightest neutrino mass (mlightest). For the inverted (IH, green) and normal (NH, red) hierarchies the central dark band is derived from the best-fit neutrino oscillation parameters; the lighter outer band includes their 3σ uncertainties [38]. The horizontal bands delineated by the long-dashed black lines (a), the dashed beige lines (b), and the dot-dashed blue lines (c) are the range of 90% C.L. upper limits on mββ coming from (a) 130Te (CUORE-0 combined with Cuoricino), (b) 136Xe (EXO-200, KamLAND-Zen independently), and (c) 76Ge (combined limit from Gerda, IGEX, HDM). The vertical arrows aim to emphasize the range currently probed with each isotope. The horizontal, hashed grey band indicates the range of limits on mββ expected from CUORE assuming its target 90% C.L. lower limit half-life sensitivity of 9.5 × 1025 yr is attained. 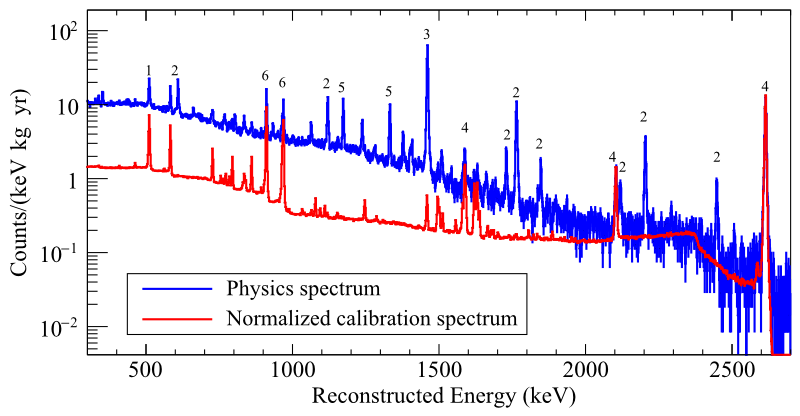 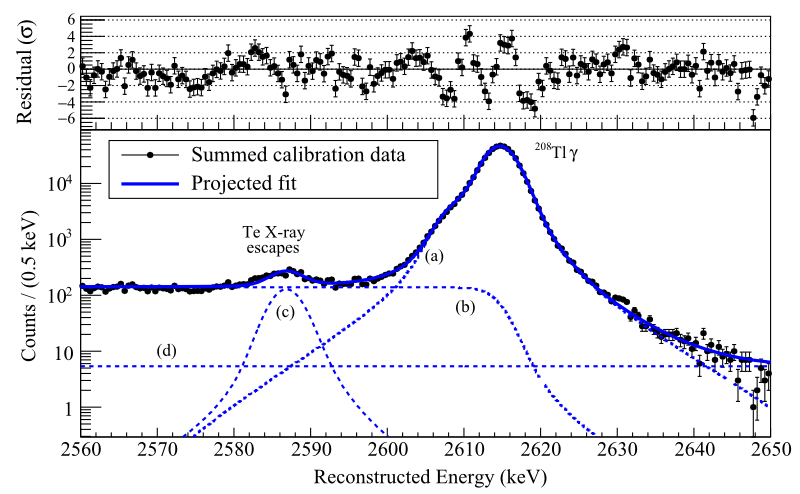 The energy resolution of the calibration data in CUORE-0 was determined from a fit to the 2615 keV 208Tl γ-ray line. This gives an effective FWHM value of 4.9 keV at 2615 keV;. Shown here is the calibration data near this line, integrated over all bolometers in all datasets. The solid blue line is the projection of the best model fit. In addition to (a) a double-Gaussian line shape for the main photopeak, the fit function includes (b) a multiscatter Compton continuum, (c) a ~30 keV Te X-ray escape peak, and (d) a continuum background. We extrapolate the resolution from calibration data to our background data at the 0νββ region of interest and obtain a background resolution at the Q-value of 5.1 ± 0.3 keV.

Backgrounds at all energies were reduced moving from Cuoricino (black line) to CUORE-0 (red shaded region). In CUORE-0, the background index in the region 2700–3900 keV, excluding the 190Pt peak at 3290 keV, is 0.016 ± 0.001 counts/(keV⋅kg⋅yr), a factor of 6.8 reduction compared to Cuoricino. The background in the region of interested was reduced to 0.058 ± 0.004 counts/(keV⋅kg⋅yr), a factor of 2.7 over Cuoricino. This is consistent with our models that place the origin of the γ contamination in the cryostat materials, which are common to both CUORE-0 and Cuoricino. This γ background forms an irreducible background for CUORE-0, but is expected to be significantly reduced in CUORE due to better material selection, better shielding, and more efficient anti-coincidence rejection.