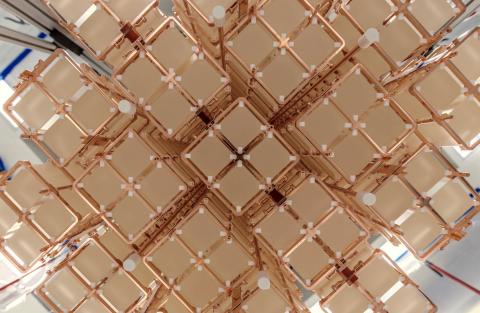 The CUORE experiment, located at the Gran Sasso National Laboratories (LNGS) of the National Institute of Nuclear Physics (INFN) in Italy, has completed the installation of 19 "towers" that make up the detector. The delicate and precise operation, which required dedicated efforts of specially trained teams of scientists, engineers, and technicians, and logistical support from the entire collaboration, was completed on August 26.

"All of the 19 towers that make up the detector, consisting of 988 Tellurium oxide crystals and weighing nearly 750 kg (1650 lbs), are now suspended from the coldest point of the experiment cryostat," said Oliviero Cremonesi, the experiment’s spokesperson. "Now the collaboration is preparing for the finishing touches to the system, and will then proceed in the coming months with the closure of the cryostat, the cooldown, and the start of science operations."

CUORE is an experiment designed to study the properties of neutrinos. In particular, the experiment looks for a rare phenomenon called neutrinoless double beta decay. Revealing this process would demonstrate a Majorana nature of neutrinos, providing a possible explanation for the prevalence of matter over antimatter in the universe. The experiment is an international collaboration of about 165 scientists from thirty institutions in Italy, USA, China, and France. CUORE is supported jointly by the Italian National Institute for Nuclear Physics (INFN) and the Department of Energy’s Office of Science and National Science Foundation in the US.

On December 10, 2015, CUORE was featured on the first episode of "Innovation Place", produced by La Repubblica for Repubblica TV and narrated by Riccardo Luna. The subtitled video is below.

CUORE was featured in the April edition of Symmetry Magazine. Read the article at symmetrymagazine.org. 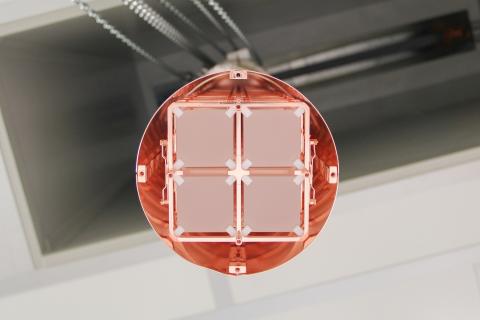 Today an international team of nuclear physicists announced the first scientific results from the Cryogenic Underground Observatory for Rare Events (CUORE) experiment. CUORE, located at the INFN Gran Sasso National Laboratories in Italy, is designed to confirm the existence of the Majorana neutrino, which scientists believe could hold the key to why there is an abundance of matter over antimatter. Or put another way: why we exist in this universe.

The results of the experiment, called CUORE-0, were announced at INFN Gran Sasso Laboratories (LNGS) in Italy, the U.S. Department of Energy's Lawrence Berkeley National Laboratory (Berkeley Lab), and at other institutions in the US.

The findings are twofold. First, the CUORE-0 results place some of the most sensitive constraints on the mass of the elusive Majorana neutrino to date. With these new constraints, the CUORE team is essentially shrinking the size of the haystack that hides the Majorana needle, making it much more likely to be found.

Second, the experiment, successfully demonstrates the performance of CUORE's novel design--a detector made of towers of Rubik's cube-sized crystals of tellurium dioxide. These towers are placed in a high-tech refrigerator that has been painstakingly decontaminated, shielded from cosmic rays, and cooled to near absolute zero.

Today's results represent data collected over two years from just one tower of tellurium dioxide crystals. By the end of the year, all 19 towers, each containing 52 crystals, will be online, increasing CUORE's sensitivity by a factor of 20.

"CUORE-0 is so far the largest detector operating at a temperature very close to absolute zero," says Dr. Oliviero Cremonesi of INFN-Milano Bicocca, spokesperson for the CUORE collaboration. "CUORE is presently in its final stages of construction, and when completed, it will study the nuclear processes associated with the Majorana neutrino with unprecedented sensitivity."

"With the CUORE-0 results, we've proven that our experimental design, materials, and processes, which include extremely clean surfaces, pure materials, and precision assembly, are paying off," says Yury Kolomensky, senior faculty scientist in the Physics Division at Berkeley Lab, professor of physics at UC Berkeley, and U.S. spokesperson for the CUORE collaboration.

Annihilations in the Early Universe
To pin down the Majorana neutrino, the researchers are looking for a telltale indicator, a rare nuclear process called neutrinoless double-beta decay. This process is expected to occur infrequently, if at all: less than once every septillion (a trillion trillion, or, a 1 followed by 24 zeros) years per nucleus.

"In 1937, Ettore Majorana predicted that neutrinos and anti-neutrinos could be two manifestations of the same particle - in modern language, they are called Majorana particles," says Reina Maruyama, assistant professor of physics at Yale University, and a member of the CUORE Physics Board, which guided the analysis of the data. "Detecting neutrinoless double-beta decay would lead us directly to the Majorana particle, and give us hints as to why the universe has so much more matter than antimatter."

Known laws of physics forbid such matter-antimatter transformations for normal electrically charged particles like electrons and protons. But neutrinos, which are electrically neutral, may be a special kind of matter with special capabilities.

The proposed matter-antimatter transitions, while extraordinarily rare now, if they happen at all, may have been common in the universe just after the big bang. The remainder of existence, then, after all the annihilations, would be the matter-full universe we see today.

Crystal Clarity
The CUORE crystals of tellurium dioxide are packed with more than 50 septillion nuclei of tellurium-130, a naturally occurring isotope that can produce double-beta decay and possibly neutrinoless double-beta decay. For the experiment, the crystal towers sit in an extremely cold refrigerator called a cryostat that's cooled to about 10 milliKelvin or -273.14 degrees Celsius. Last year, the CUORE cryostat set a record for being the coldest volume of its size.

In the very cold CUORE crystals, presence of both nuclear processes would produce small but precisely measured temperature rises, observable by highly sensitive temperature detectors within the cryostat. These temperature increases correspond to spectra--essentially the amount of energy given off--from the nuclear event. Two-neutrino double-beta decay produces a broad spectrum. In contrast, neutrinoless double-beta decay would create a characteristic peak at the energy of 2528 kiloelectron-volts. This peak is what the researchers are looking for.

The CUORE experiment sits about a kilometer beneath the tallest mountain of the Apennine range in Italy, where rock shields it from cosmic rays. This location, as well as the experimental design, enables the sensitivity required to detect neutrinoless double-beta decay.

"The sensitivity demonstrated by the results today is outstanding," says Stefano Ragazzi, director of the INFN Gran Sasso National Laboratories. "The INFN Gran Sasso Laboratories offers a worldwide unique environment to search for ultra-rare interactions of Majorana neutrinos and dark matter particles and is proud to host the most sensitive experiments in these fields of research."

"While there's no direct evidence of the Majorana neutrino yet, our team is optimistic that CUORE is well positioned to find it," says Ettore Fiorini, professor emeritus of physics at the University of Milano-Bicocca and founding spokesperson emeritus of the experiment. "There is a competition of sorts, with other experiments using complementary techniques to CUORE turning on at about the same time. The next few years will be tremendously exciting."

CUORE is supported jointly by the Italian National Institute for Nuclear Physics Istituto Nazionale di Fisica Nucleare (INFN) in Italy, and the Department of Energy's Office of Science and the National Science Foundation in the US. The CUORE collaboration is made of 157 scientists from Italy, U.S., China, France, and Spain, and is based in the underground Italian facility called INFN Gran Sasso National Laboratories (LNGS) of the INFN.

CUORE: The Coldest Heart in the Known Universe 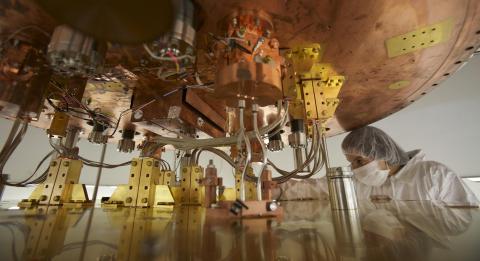 The CUORE collaboration at the INFN Gran Sasso National Laboratory has set a world record by cooling a copper vessel with the volume of a cubic meter to a temperature of 6 milliKelvin: it is the first experiment ever to cool a mass and a volume of this size to a temperature this close to absolute zero (0 Kelvin). The cooled copper mass, weighing approx. 400 kg, was the coldest cubic meter in the universe for over 15 days.

CUORE is an international collaboration involving some 130 scientists mainly from Italy, USA, China, Spain, and France. CUORE is supported by the Istituto Nazionale di Fisica Nucleare (INFN) in Italy and the Department of Energy Office of Science (Office of Nuclear Physics), the National Science Foundation, and Alfred P. Sloan Foundation in the United States.

CUORE (which stands for Cryogenic Underground Observatory for Rare Events, but is also Italian for Heart) is an experiment being built at the INFN Gran Sasso underground laboratory to study the properties of neutrinos and search for rare processes. The CUORE cryostat is the only one of its kind in the world, not only in terms of its dimensions, extreme temperatures, and cooling power, but also for the selected materials and for the building techniques that both guarantee very low levels of radioactivity.

CUORE is seeking to observe a hypothesized rare process called neutrinoless double-beta decay. Detection of this process would allow researchers to demonstrate, for the first time, the transformation of antineutrinos to neutrinos, thereby offering a possible explanation for the abundance of matter over anti-matter in our Universe. These transitions are only possible if the neutrinos are so-called Majorana particles, as suggested by Italian physicist Ettore Majorana in 1930s. The experiment will also be sensitive to the minuscule value of the neutrino mass. CUORE is designed to work in ultra-cold conditions at the temperatures of around 10 mK, i.e. ten thousandths of a degree above absolute zero. It consists of tellurium dioxide crystals serving as bolometers (radiation detectors which measure energy by recording tiny fluctuations in the detector's temperature).

The cryostat was realized and funded by the Italian National Institute for Nuclear Physics (INFN); the University of Milano Bicocca coordinated the research team in charge of the design of the cryogenic system. When complete, CUORE will consist of approximately 1000 instrumented tellurium dioxide crystals. It will be covered by shielding made of ancient Roman lead, a material characterized by a very low level of intrinsic radioactivity. The mass of materials at the frigid temperatures near absolute zero will be almost two tonnes. An international team of physicists, including students and postdoctoral scholars from Italy and the US, worked tirelessly for over a year to assemble the cryostat, iron out the kinks, and successfully demonstrate its record-breaking performance.

In the most recent operational test of the cryostat, the temperature reached 6 milliKelvin, equal to -273.144 degrees centigrade. This is stunningly close to absolute zero, which is equal to -273.15 degrees C. No experiment on Earth has ever cooled a similar mass or volume to temperatures this low; similar conditions are also not expected to arise in Nature. This gives CUORE the distinction of being the coldest cubic meter in the known Universe.

The successful solution to a technological challenge of cooling the entire experimental mass of almost 2 tonnes to the temperature of a few milliKelvin was made possible through a strong collaboration with industrial partners of high profile such as the Leiden Cryogenics BV (the Netherlands), which designed and built the unique refrigeration system, and the Simic SpA (Italy), which built the cryostat vessels.